Music, champaign and strawberries – an interview with Vincent Cavanagh (Anathema)

There’s no exaggeration in saying that Anathema is the most loved band in Poland. The concerts during the spring part of the tour were completely sold out which made the promoters decide to invite the band again for the autumn part of the tour. This time wasn’t different – Anathema’s fans stuffed Polish venues proving their faithfulness and affection to the band. Being able to take part in the gig in Gdynia, I understood the mechanism: the audiences give back the energy they get from the band; that magical loop turned the night into an unforgettable experience. After the concert, still with chills down my spine and goosebumps all over my body, I had an opportunity to talk with Vincent Cavanagh about over two decades of Anathema.

How would you describe the way you’ve been through since your first album to the last one?

VC: A natural progression through adolescence into honesty. The first albums were adolescence with a spark of honesty in there, but I think once you strip away the layers of aggression and the things you have when you’re 15 years old, you realize there’s much more to life. I guess the progression is like an evolution. It follows our path as human beings.

Doesn’t it bother you that your music doesn’t get to the broader audiences even if it has a potential to become more popular? You’re not in the mainstream.

VC: I don’t know. What can I do? I can’t look at the problem and say: “it’s a problem”. I have to figure out the solution. It’s like anything in life; a problem is only a problem if it can’t be solved. If it can be solved, if there is a solution, then it’s not a problem. It’s just something to do, something to overcome – the challenge. So for this I would say I look at the situation and I don’t get frustrated or upset. I just know what I have to do and keep doing in order for something good to happen. Now, of course in this business it doesn’t just involve me or it doesn’t just involve the band. You need a lot of other people around you with connections in the industry. And you also need a lot of luck. So I know that if we do things in the right way and we surround ourselves with the right people, then we should be ok, I hope.

Would you ever compromise in making music?

How did you manage to make Weather Systems with you in France, Danny and Jamie in Holland, and John and Lee in England?

VC: Most of Weather Systems was done by me, Danny and John and the producer Christer. When we have to work, we make sure we’re there. Writing the album happened a lot in the studio, some of it beforehand, but we didn’t really practise or rehearse beforehand. We just went to the studio and said “ok, let’s record”. It was one of those albums. So that can be good. It’s something that you should do in the studio: you should still keep some ideas fresh in the moment, but having said that I think next time I’d like more preparation. The distance isn’t much of a problem, really. When we have to work, we work hard. For this tour, for example, we became together for two weeks, and we lived in a studio, we set up the equipments and we record ourselves play, rehearse, figure out all the parts, make sure everybody is in good shape and then we are ready to go. So when we work, when have to – we have to. Otherwise, we don’t really see each other. This is funny. We’ve known each other all of our lives. It’s like we’ve kind of fed up with looking at each other. [laughs] We’re kind of married to each other. Do you know what I mean? It’s like a marriage. It’s weird. 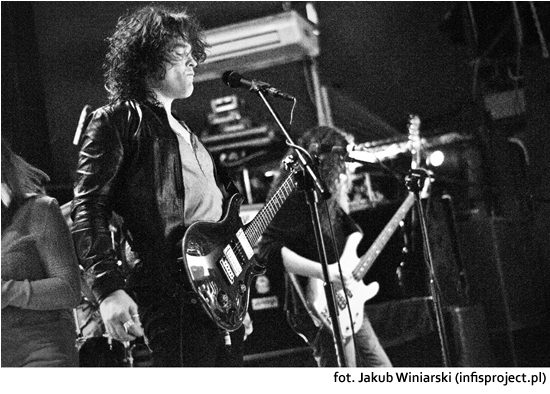 VC: Oh yeah. It’s a nice thing to get together and do what we do. We do enjoy it… but I don’t want to see them all the time. [laughs]

Haven’t you ever been tempted to start a solo career?

VC: A solo career? Yeah, but it’s one of those things I don’t know whether I call it a solo career as such, but I’ve been doing music on my own for the last couple of years. It’s very different to Anathema. No guitars, no voice, no drums, no band. It’s just me and keyboards, sometime a voice. So I don’t know when I’ll do it. I’m still writing at the minute. I think next year I’ll be able to release it, but I don’t know what it’s gonna be called or if it’s gonna be a solo album. I’m not sure yet if I want to name it after myself or give it a name or something else. Don’t really know.

What’s most important both in making and receiving music?

VC: Well, if there was no one making it, there’ll be nobody to receive it. I guess the two go hand in hand, because if you make the music and there’s nobody to listen to it, then what’s it there for? That’s a good philosophical question actually. If no one was listening to our music, would we be still making it? Yes, I think we would. It would be very different, we would have different lives. Let’s just say, in the world where people don’t buy music at all and these people don’t go to concerts, there’s no way to make a living from your music. In that case we would have to find some other way to make a living, but still make music, because it’s in your blood. It’s like a lot of painters can’t stop painting. Artists – they have to make art. And people have to make music. They don’t really have a choice because it’s like one of those things going round in your head, at four o’clock in the morning, and it won’t let you sleep until you do it. And it’s just there, in your head all the time. Sometimes it gives you motivation when other people are consuming your music, but that’s not why you make it. What you’re making is truly yours, it’s your thing and when IT is finished, when IT is ready, IT will tell you. The music itself will actually let you know. Or sometimes it will say: “ok, I need to go over here, I’m not ready, I need to try this, I need to try that”. It’s almost like the music itself is leading you rather than you leading the music. And then when it’s finished it’s like: “ok, well, I’m done, there’s nothing more to do to me”. Then you give it to the public. And then it’s not yours any more. It’s theirs. And that’s the way it works.

Does being a musician change your perspective of listening to music for pleasure?

VC: Only in a sense that I’m probably exposed to some things that I might not be exposed to where I’m not a musician, but at the same time I’m a huge music fan, so if I wasn’t playing music, I’d be discovering music all the time on my own anyway. I have my methods. I usually look for a great label like Constellation Records in Canada. Godspeed You! Black Emperor, Silver mt. Zion, Frankie Sparo, that kind of thing.  And then you’ve got Type Records doing some great stuff these days. Warp Records, who I originally started with – Aphex Twin, Boards of Canada, Autechre, Squarepusher, all that kind of stuff played. And then Fat Cat Records, Kscope even these days. Let’s say if I wasn’t playing music, I would be listening to some of these bands on Kscope like The Engineers, North Atlantic Oscillation, Steven Wilson – I’d be interested to see “oh yeah, this is pretty cool, man!” Labels are a good place to start. 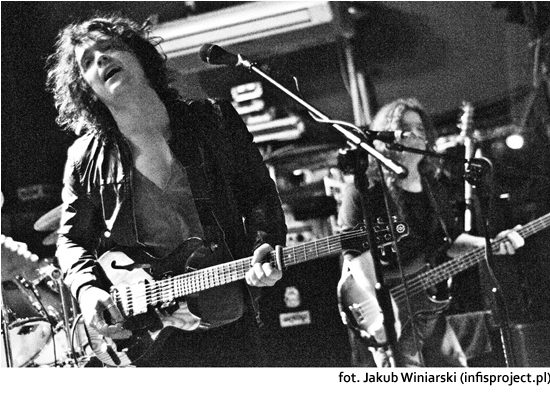 Ok, so now you’re on a tour, then you’re releasing a DVD, and what’s next?

I bet you are…

VC: Yeah, all the time! We’ve got loads and loads of new ideas already, lots of ideas for the new record. We’ve got more than an album, so it’s like how do we divide the songs. We could say “ok, these ten songs, that’s an album, but what we’re gonna do with these? This is great stuff, but doesn’t fit with that.” When you make a record you have to balance the songs with each other so make it perfect. It’s like a recipe, you’ve got to add the right ingredients so it’s perfect. And that’s that record: these songs may be great but they just don’t fit in. It’s like you wouldn’t put chocolate on French fries. Or maybe you would [laughs]. So then you go – you keep things separate. We’ll see what we wanna do with it all, but first, of course, the blu-ray/DVD concert film, directed by Lasse Hoile that’s coming out on Kscope, probably in the spring. I would say that the next release would be earliest September next year.

How do you find yourself in a foreign country as a minority?

VC: I have to speak French. That’s the first thing I did. That’s incredibly important to me. And also to respect the culture. I’m from the place called Liverpool which is one of the most friendly cities in the world that I’ve ever been or ever seen. I’m proud to come from Liverpool because I take that with me wherever I go. Paris is a big city and not a lot of people talk to each other on the tube or wherever. Sometimes I keep myself to myself, but if by chance I talk to a stranger, I’m always very friendly. Always. And I’m never rude. When people are rude to me, it pisses me off [laughs]. Especially people, usually on the subway, just barge you on or they go [clicking sound]. That winds me up! When people tut me at, I say: “Excuse me! Did you just tut at me?!” And then they get scared and don’t do anything [laughs]. For the most part I absolutely adore the lifestyle I’ve got. First of all, I love my girlfriend who’s the reason I’m there. My apartment is lovely, I love the style of apartments they’ve got there. I’ve got a new, little cat.

What makes u happy?

VC: [after a long hesitation] Well, pretty much everything [laughs]. Just waking up in the morning. Sometimes when I can avoid dark thoughts and depression, things like that then I’m ok. My girlfriend, my music, making music more than anything. Playing live, my cat, sometimes my football team…

Of course! Anything else?

VC: A great film, a great movie, a simple day of complete relaxation whether you’re in or out –  just to relax and take things easy. I’ve been a very busy person, so on the rare occasions that I get to spend some time with my loved one and just do nothing – I love that. Champaign in the morning on my birthday – that’s quite good. First thing in the morning for breakfast with strawberries and chocolate. If you start your day with chocolate, strawberries and champaign, the rest of the day is already fantastic!

So this is all I wish you. Thank you very much for your time.

VC: Thank you and you too.

The concert pictures provided by the kind permission of Jakub Winiarski infisproject.pl.

I would like to thank Linn Hutchinson and Rob Highcraft for their help. 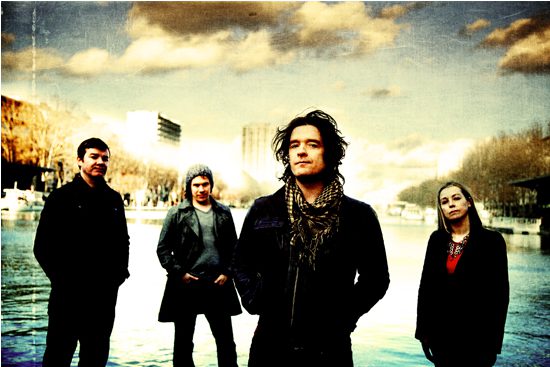